Norman K. Luxton a.k.a. “Mr. Banff” was a trader, naturalist, conservationist, entrepreneur, writer and friend of the First Nations of North America. He actively promoted Banff as “The Playground of the Canadian Rockies” throughout his life, enticing tourists worldwide to visit the majestic mountain town all year round.

His built legacy includes developing the first all-season hotel in Banff, the King Edward Hotel, as well as the Lux Block comprised of the Lux Theatre and several retail shops, the Sign of the Goat Curio Shop, the Luxton Museum of the Plains Indians now called the Buffalo Nations Museum and for nearly 50 years, he published the Banff Crag and Canyon Newspaper. 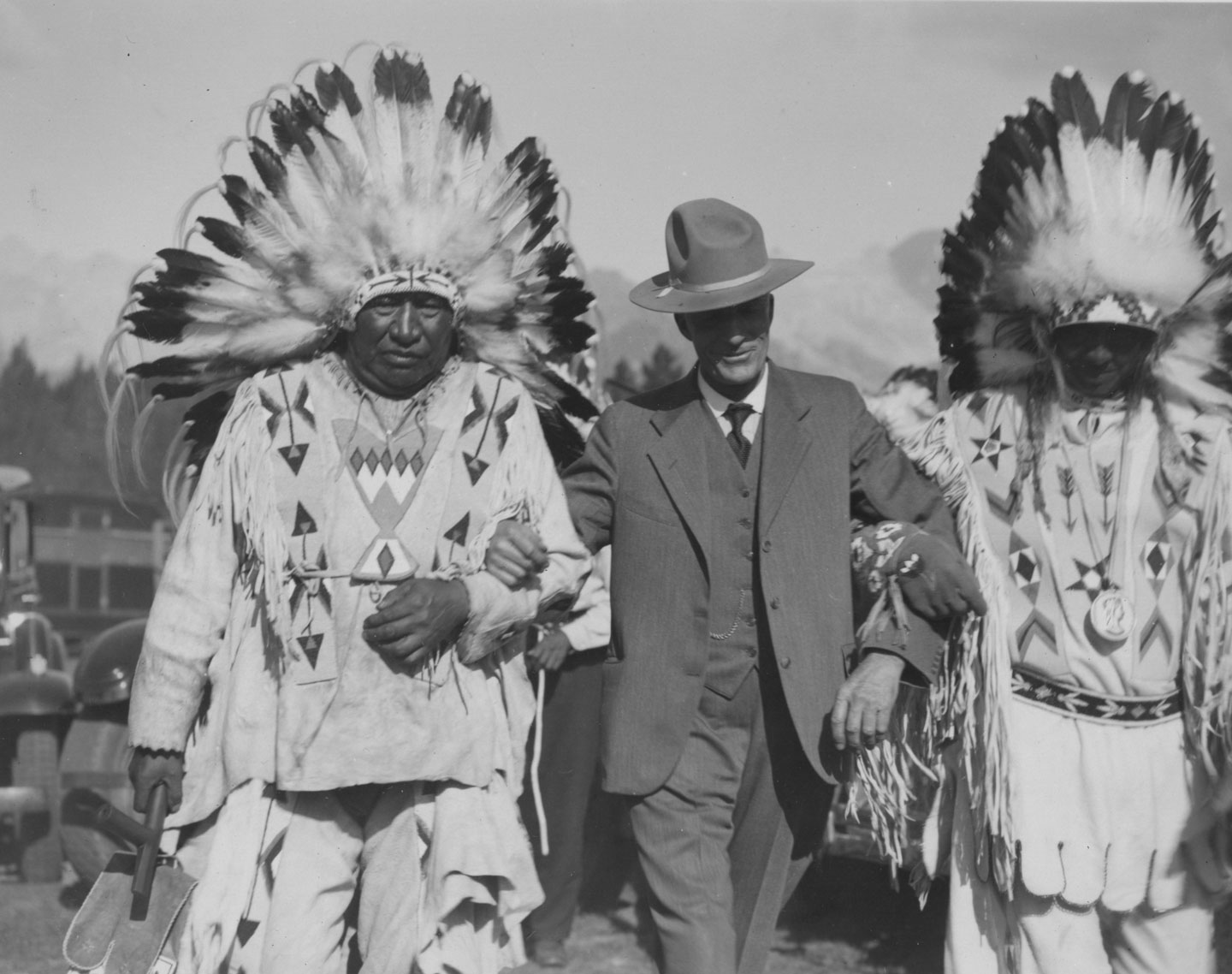 In addition, he helped to organize the first of many Banff Indian Days (1909 – 1950) and the Banff Winter Carnival. His support for the Stoney Tribe and efforts to help them obtain more land, resulted in Luxton being named honorary “Chief White Shield”. The Blackfeet too, honoured him with the rank and title of “Chief White Eagle.”

Born in Upper Fort Garry (now Winnipeg, Manitoba) on Nov. 2, 1876, Norman was the second son of William Fisher Luxton and Sarah Jane Edwards Luxton. His father, William Luxton co-founded the Winnipeg Free Press, where Norman would later work and begin his lifelong affection for the newspaper industry. At the age of 16, he joined the Indian Agency at Rat Portage, finding it rather dull except when called to travel north to deliver Treaty money.

Norman then ventured west, moving to Calgary and getting a job with the Calgary Herald where he worked in various roles including reporter, typesetter and manager. Still itching to explore the world, he then moved to Vancouver, working for a weekly publication and thereafter the Vancouver Sun.

It would be here on the edge of the Pacific that he would meet Captain Jack Voss. The two determined and adventurous souls would plan and set out on a voyage to circumnavigate the globe via canoe. This journey would capture international attention and change the course of Norman’s life.

In 1901, Norman journeyed 10,000 miles on the Pacific Ocean in a dug-out canoe named the Tilikum (meaning “friend”) with Capt. John Voss. After enduring five months and thousands of kilometres before abandoning the trip for medical attention in Fiji, Luxton documented his days on the Pacific in his Tilikum Journal. Edited by his daughter Eleanor, readers can learn about the journey in Tilikum Luxton’s Pacific Crossing. The Tilikum now resides in the BC Maritime Museum in Victoria, BC.

At the urging of friends, Norman then relocated to Banff to recuperate and regain his health. Upon his arrival, Norman invited his siblings, Louis, George and Malloch to join him. He would go on to buy and publish the Banff Crag and Canyon newspaper, build the Sign of the Goat Curio Shop, the King Edward Hotel and Livery, the Lux Block and the Luxton Bros. Insurance company alongside his siblings.

In 1904, Norman married Georgina (Georgie) Elizabeth McDougall, of the pioneer missionary McDougall family of Morleyville, Alberta. Norman and Georgie Luxton had one child, Eleanor Georgina, born in Banff in 1908.

The Luxton’s were ardent advocates for Banff, involved with numerous local organizations and events. Norman managed the Banff Indian Days from 1909 to 1950, founded the Banff Winter Carnival, and was involved with native events at the Calgary Stampede for 25 years. In 1953, Norman established a museum to house his lifetime collection of native artifacts. The Luxton Museum of the Plains Indians was built in co-operation with Eric Harvie of the Glenbow Foundation of Calgary and is now called the Buffalo Nations Luxton Museum.

On October 26, 1962 Norman Kenny Luxton, newspaperman, hunter, trader, adventurer and sailor died in Calgary. He was buried in his beloved Banff.

Georgina (Georgie) McDougall Luxton was the granddaughter of pioneer missionaries George and Elizabeth McDougall who settled in Alberta in 1862. Georgie’s parents, David McDougall and Annie McKenzie McDougall, ran the Morleyville trading post. Georgie is reputed as being the first non-native child born in what is now Alberta. 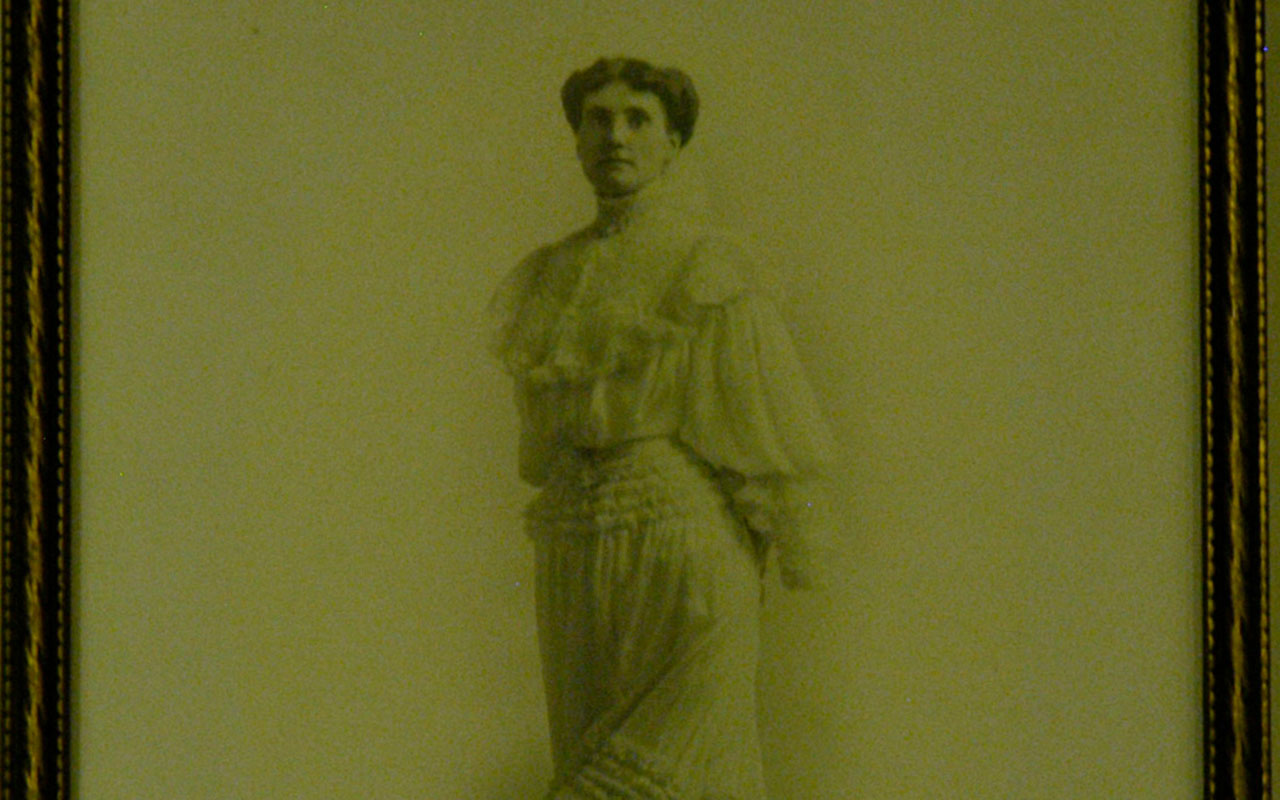 Morleyville was Southern Alberta’s first pioneer settlement (then Rupert’s Land which would become part of the NW territories) that collected around the McDougall Methodist Mission to the Stoneys. It would become quite the hub for settlers coming to the Bow Valley, serving as an important catalyst for the opening of the west and the later growth of ranching and agricultural settlement in the area.

Georgie attended the Stoney school until one was built for the white children. She spoke the Stoney Nakoda and Cree languages fluently and had life-long friends among the Stoney people. Later in life, she would manage her father’s trading post and be taken into the Stoney tribe as Princess and Blood Sister. The Stoneys gave her the name of “Rainbow Woman” because she always brought peace after the storm.

After five years of study at the Wesleyan Female College in Hamilton, Ontario, Georgie returned to Morleyville to help her father manage his store. Every Sunday, she played the organ for the McDougall Church at four services, two for the non-aboriginals and two for the Stoneys. The McDougall Memorial Church stood for 142 years just off Highway 1A between Cochrane and Banff, designated as a historic site until it was destroyed by fire in 2017.

On November 2, 1904 Georgie married Norman Luxton and they had one daughter, Eleanor who was born in Banff in 1908. In addition to being an accomplished pianist, Georgie was also a talented painter and gardener who is credited with growing one of Banff’s first flower gardens which has been restored and can be visited at the Luxton Home Museum today.

Georgie passed in 1965 at the age of 95 and is laid to rest alongside her husband in Banff.

Eleanor Luxton was a Renaissance woman who did everything from writing books to designing locomotives for the Canadian Pacific Railway. She was a writer, historian, field-worker for the Glenbow Foundation, teacher, mechanical draftsman, and astute business woman. The only daughter of Banff pioneers Norman and Georgina Luxton, Eleanor grew up in Banff. 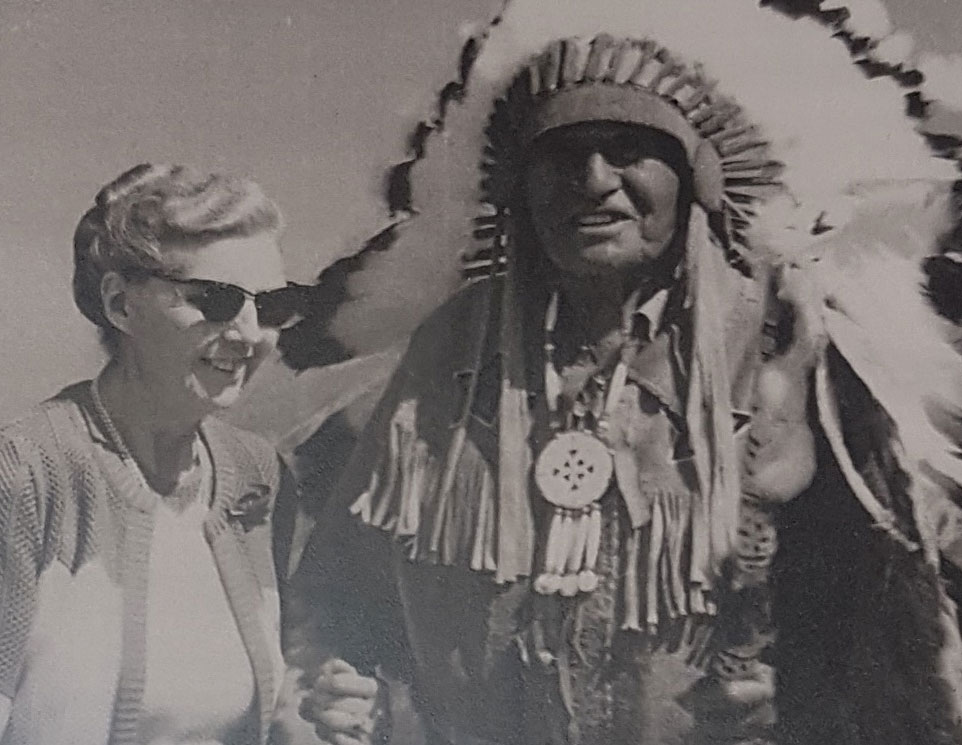 After graduating from high school in 1926, she attended the University of Alberta where she obtained degrees in Education and History, in addition to completing courses in Biology and Natural History. Upon returning to Banff in 1936, Eleanor taught at the Banff Community High School which continues to commemorate her to this day with an annual Eleanor Luxton Creative Writing contest.

During the Second World War Eleanor studied mechanical drafting and worked on locomotive design for the Canadian Pacific Railway in Montreal.

Eleanor wrote a comprehensive history of Banff from its geological birth, through its exploration and settlement, to its growth as Canada’s first National Park aptly titled Banff, Canada’s First National Park.

Over the course of 30 years, Eleanor also wrote Latch String Out which celebrates Alberta’s pioneer history through a predominately female perspective capturing the life of her grandmother Annie McDougall. Annie saw some of the last buffalo hunting in the West, witnessed the signing of Treaty No. 7, and lived through the dramatic changes and growth of communities at Morley, Banff, and Calgary.

After her father’s death in 1962, Eleanor returned to the family home in Banff to live with her mother. She resided at the family home on Bear Street until her passing in 1995.

Before her death, she had the foresight to establish the Eleanor Luxton Historical Foundation to preserve the Luxton Family Home, its contents, and grounds as a museum.